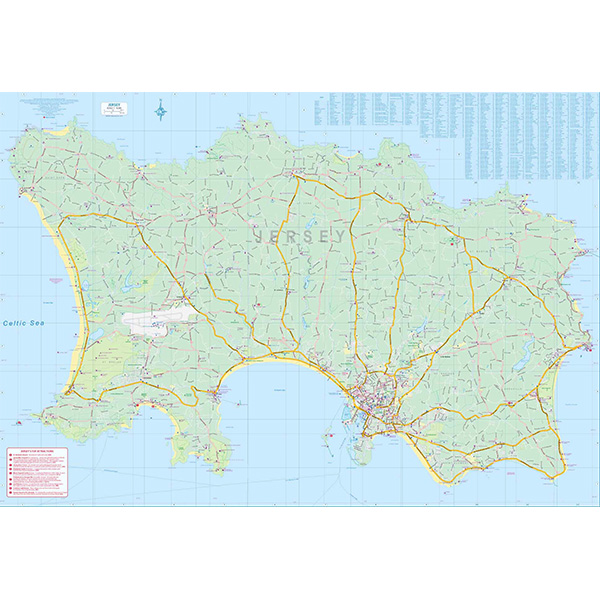 Over de kaart van Jersey & Guernsey
ITMB is pleased to re-introduce the Channel Islands map area after a lengthy hiatus of preparing new artwork. The first version of this part of Europe was licensed artwork by a local firm in Jersey, and upon running out of copies of the printed map, we opted to prepare fresh artwork of our own to continue this interesting corner of the continent to continue to be available. The islands, collectively known in English as the Channel Islands, are one of those anomalies that make Europe so attractive. They are part of Great Britain, but not part of the UK; hence, they are not part of the EU. They are self-governing entities ‘owned’ by the Queen in her role of being Duchess of Normandy. This is, of course, merely a hereditary situation, but the islands were the personal possessions of William the Conqueror in 1066, at the time he led Norman forces into Britain and won the Battle of Hastings. They remained his personal possessions and have been passed on from monarch to monarch for more than 950 years. Located just off the French coast, not too far from St. Malo, the islands were occupied by German forces during WW2, and are now readily available by ferry or airplane from both France and Britain. There are actually, five inhabited islands, of which Jersey and Guernsey are the largest. Alderney, Sark, and Herm make up the others. Ferries link the islands, and tourism is a major activity of the islands, along with banking. Most visitors arrive on Jersey, which on our map occupies an entire side. The airport is located near the western end of the island. Ferries arrive at St. Helier I’m very pleased that it is once again available.. Accommodations are plentiful and car rentals the best way to explore the island. The map shows all touristic attractions, roads, and rural restaurants/pubs. The reverse side is dominated by Guernsey, naturally, and its historic main town of St. Pete Port, but the shape of the island allowed us to include generous inset maps of Alderney and Sark, while including tiny Herm in the main map. This map has two covers: one showing Jersey and Guernsey, and the other noting Guernsey and Jersey, with two different pictures. And in the upper right corner, the flags of each island. This is one of those ‘must see before death’ touristic destinations and is well worth the visit.